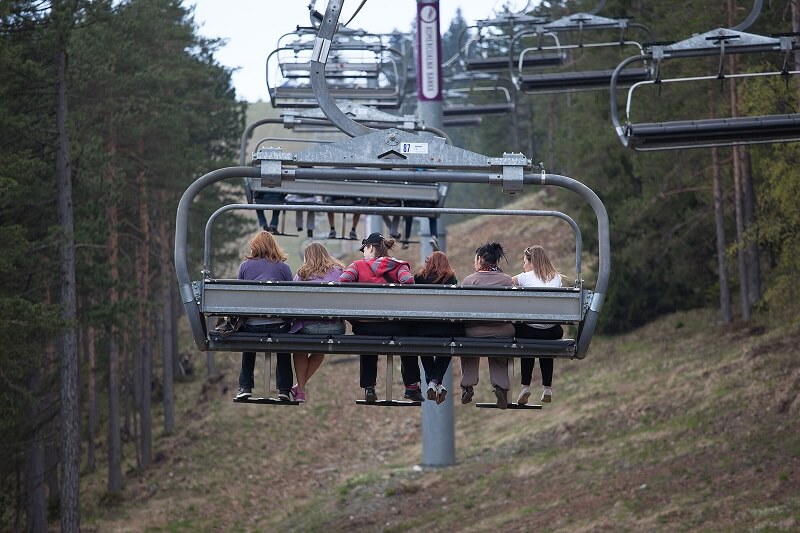 Tornik is the highest peak of Zlatibor and it is only 9km away from the very center of the town. It is placed at an altitude of 1110-1490m. It represents a favourite spot for amateur and professional skiers, since there is the biggest ski center in the country. The total capacity of the ski area is about 5,400 skiers per hour. The center is equipped with a six-seater ropeway, as well as two ski lifts of the “anchor” type. Four ski tracks, Čigota, Tornik, Ribnica and Zmajevac are equipped with artificial snow system, so this resort is no longer dependent on weather conditions. It also features a playground and a carousel. The total length of ski slopes is about 7000 meters. Ski tracks Tornik and Zmajevac have the approval for the organization of slalom and giant slalom races. 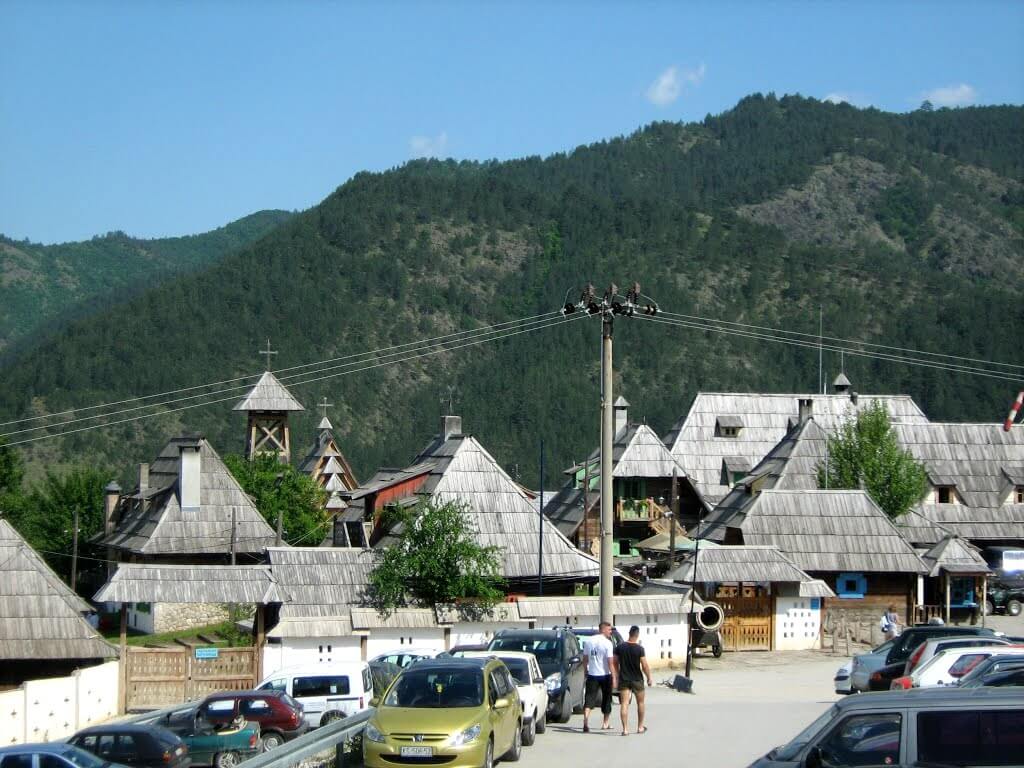 Mokra Gora is a valley situated between Zlatibor and Tara. Next to there is Šargan Pass, which connects the highest peaks of Tara and Zlatibor. Until 1974, this valley had one of the most beautiful railways in the world. Today the train runs again, but only as a touristic attraction. From Mokra Gora to Šargan Vitasi station you will pass through 22 tunnels and over five bridges, and also experience an altitude difference of 300 meters, and a total distance of 15440m. The steam locomotive goes down the track shaped like the number 8, hence the name “Šargan’s Eight.” Along the tracks there is a larger number of exhibits, mostly old locomotives and wagons which are protected as monuments of technical culture. This makes Mokra Gora an unique open air museum.

Ethno village Drvengrad, which is located on Mećavnik hill, is also an interesting attraction. It was built according to the idea of our famous film director Emir Kusturica. The village is full of authentic log cabins, which were transfered to this area. The oldest of them date from 1900s. Drvengrad was built as an rectangular plaza, whose main axis are determined by the entrance gate and the small wooden church. There is a square, paved with wooden cubes and cut wooden blocks, which is full of log houses each of which represent a different facillity: a cake shop, a shop selling local folk art, a gallery, a library, a restaurant and cinema.

THE MONASTERY OF UVAC AND DUBRAVA 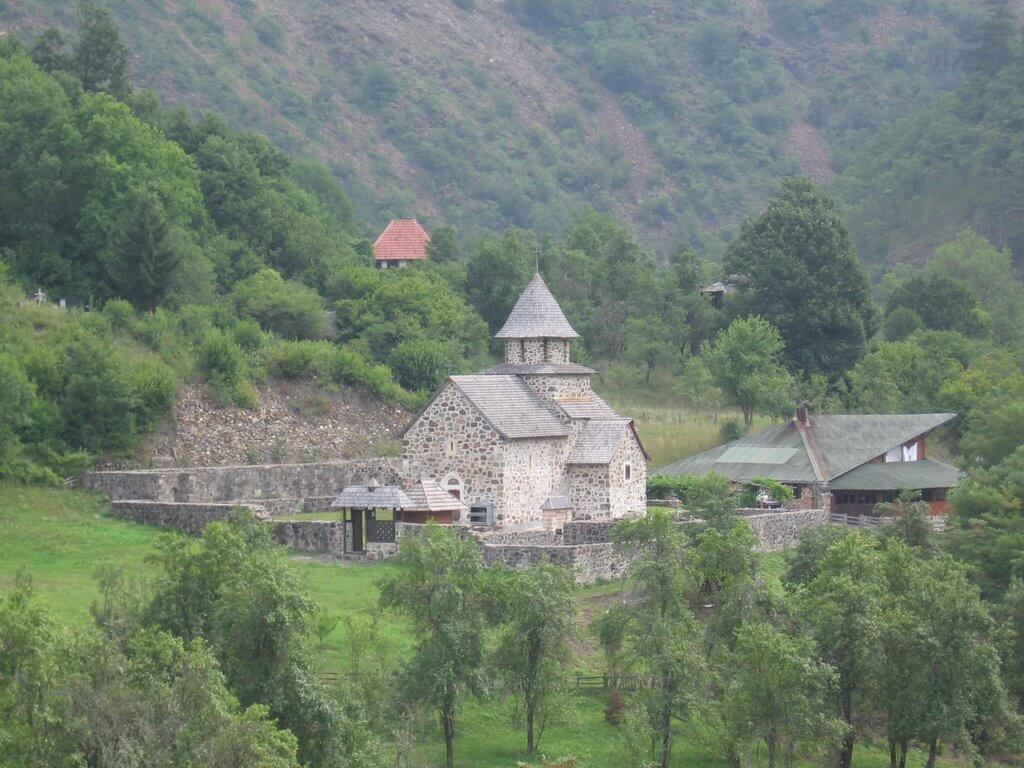 The Monastery of Uvac is located in the bottom of the Uvac Canyon in the Village of Stublo, at an altitude of about 520m. It is tucked among the hills of the nearby peak Hum and the peak Kobilja Glava). Uvac Monastery dates from the Middle Ages. It is said that the monastery represents an endowment of Nemanjićs, that it was built during the 12th and 13th centuries and is dedicated to the birth of the Virgin. In the Middle Ages, Uvac was considered to be one of the richest monasteries. It was surrounded by fertile land around the River of Uvac. Unfortunately, this monastery can only be reached by an off-road vehicle.

Near the Uvac Monastery, there is the Monastery of Dubrava, which ruins were discovered only in 1999. Legend has it that Father Danilo, a monk from Hilandar, had a dream which he presented to the Patriarch German, who told him to find the lost monastery which hides a great treasure. So the father Danilo found himself in a monastery Uvac, near which he saw an oak tree that had caught his attention. In the vicinity of the oak he had soon discovered the remains of the former monastery Dubrava. It is interesting that until a decade ago there was no road to the monastery, but then the army made one by blasting. 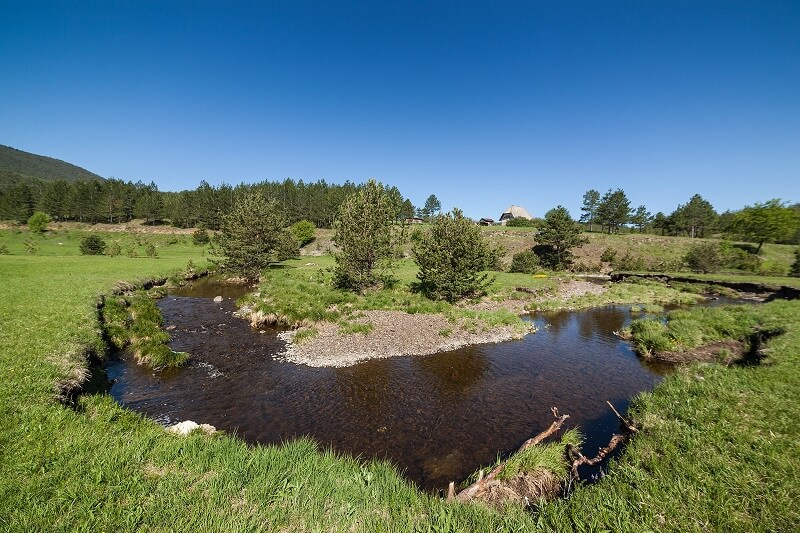 One of the most beautiful landscapes in Zlatibor can be found at Vodice. This beautiful mountain stream meanders through the meadows, surrounded by the old pine trees. The main road runs partly parallel to the small river, which gives visitors a wonderful view, especially at sunset. Besides only one hotel and several houses, there are no tourist resorts in Vodice, which leaves the breaththaking nature preserved. A picnic in Vodice is a favourite activity of many Zlatibor visitors. 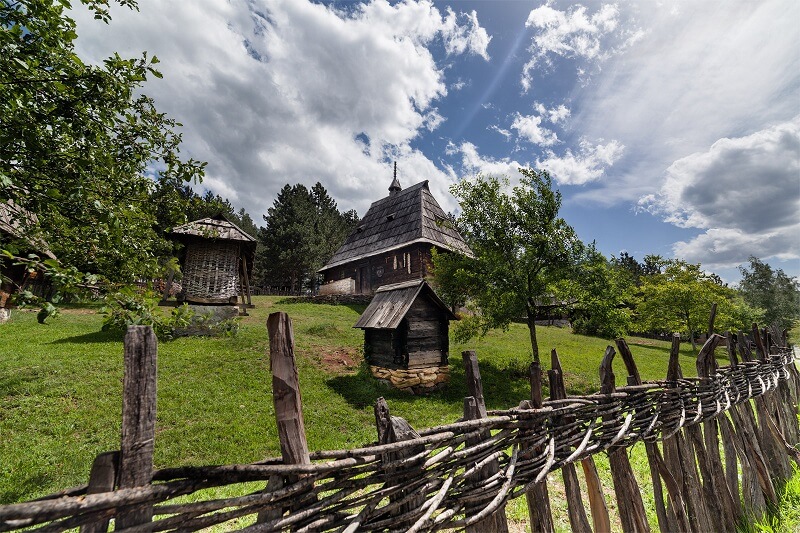 The Old Village Museum is located in Sirogojno, 30km away from Zlatibor. It is an open air museum and it shows life and housing culture of Zlatibor rural families in the late 19th and early 20th centuries. It covers an area of 5 hectares and has about 50 objects that are displaced and transferred from the surrounding villages of Zlatibor. Selected houses represent the architecture and development of housing in Zlatibor region, and also shows the social and economic relations in the countryside. During the season, you can visit many art, literary and musical exhibitions and attend many lectures and summer schools. 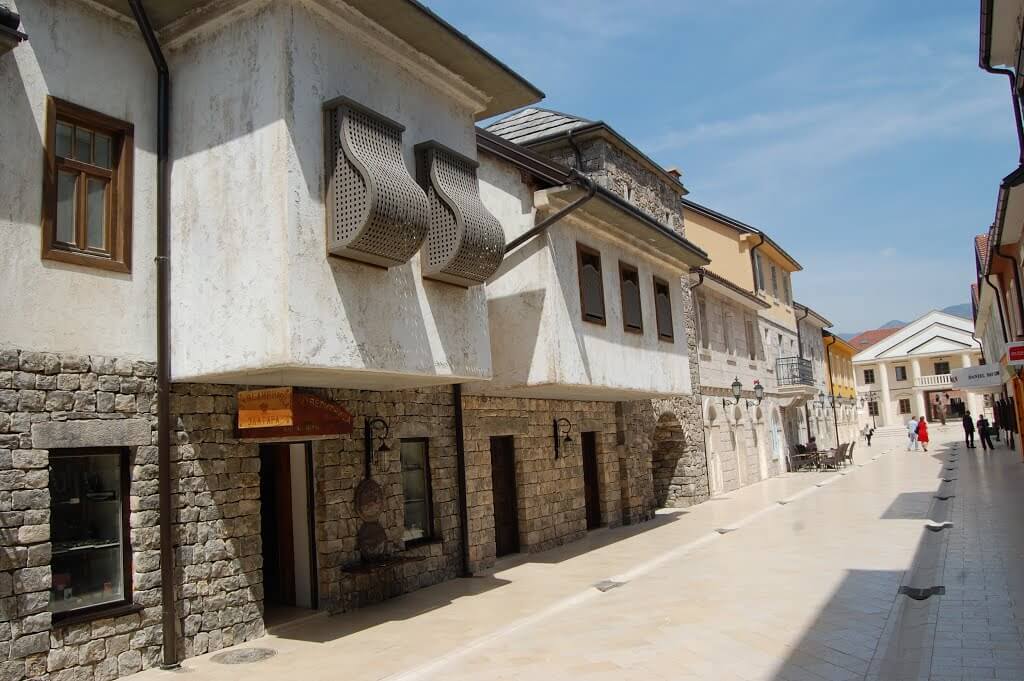 Andrićgrad is an area dedicated to the one and only Serbian Nobel Prize winner, Ivo Andrić. It combines outstanding historical periods in our region, to promote tourism, culture, art, peace, equality among people, races and genders, literacy and generosity, and connect and unite the nations, regions and the whole world. It is located on a peninsula between the rivers Drina and Rzav at about 300 meters from the Višegrad Bridge. Andrićgrad has emerged as Emir Kusturica’s idea of a stone medieval castle inspired by the deeds and characters of Ivo Andrić. In architectural terms, the city itself is a mixture of different eras and styles that are alternated throughout the history of this area: Byzantine style, the Ottoman period, the Renaissance and Classicism.

Višegrad is known for its 500-year-old stone bridge, known to everyone as “Bridge on the Drina”. The bridge is about 250 meters long and 10 meters wide. In the middle of the bridge there is a part called The Gateway. The bridge was built in the period from 1571 to 1577 and was built by the most famous Ottoman architect at that time, Kodža Mimar Sinan. It was built in the oriental style. This bridge has inspired the most famous literary work of our only Nobel Prize winner Ivo Andrić. 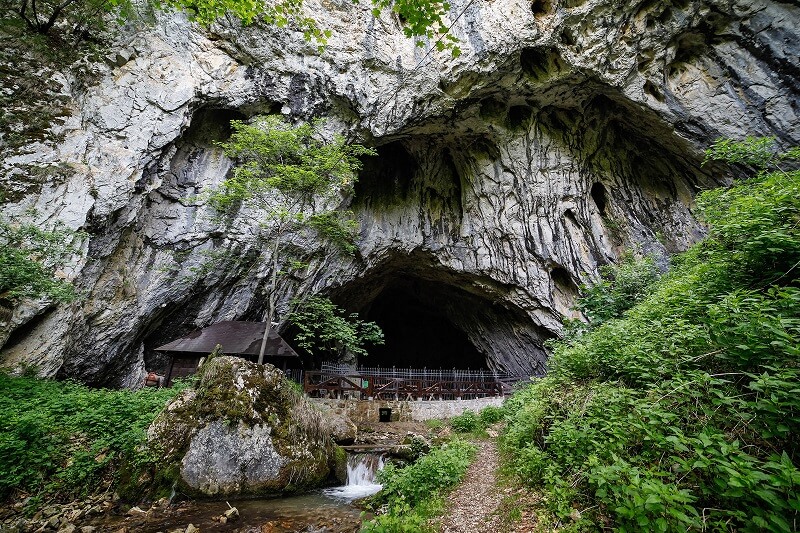 Stopić Cave is located on the northeastern side of the Zlatibor, near the village of Rožanstvo. The cave was discovered in 1901 and it consists of five parts: bright room, dark Room, large hall with tubs, channel with tubs and river channel. The touristic part of the cave has several attractive elements such as: a spacious entrance, dugure (openings in the ceiling) a cup known as “Dog Cemetery,” waterfall named “Source of Life” and a series of the largest and deepest Serbia’s cave tubs (over 7 meters deep). Tubs are periodically flooded, and some of them have become lakes. 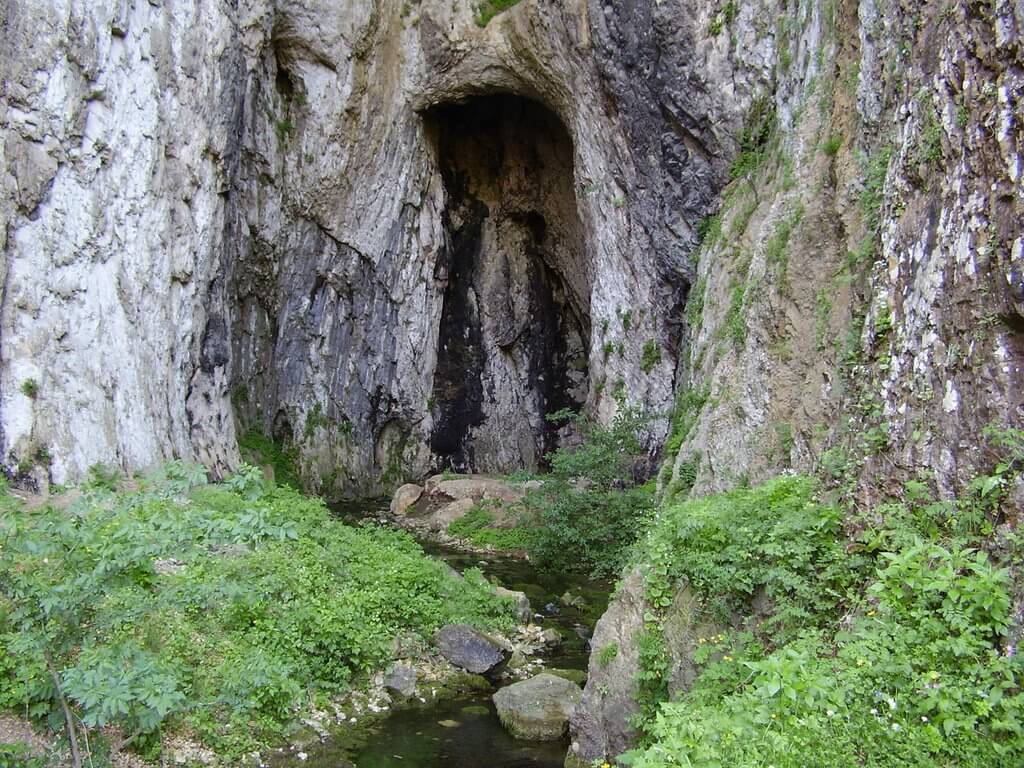 Potpeć Cave represents a protected nature area. It is located in the village of Potpeć near Užice. Potpeć cave is 10 kilometers long, but only 555 meters of its length is available for visitors. At the entrance to the cave, which is located on a 72 meters tall cliff, there are about 200 steps. In the cave you can see a great number of interesting stalactites and stalagmites, which are shaped like dragons, camels, eagles, owls, fish, etc. 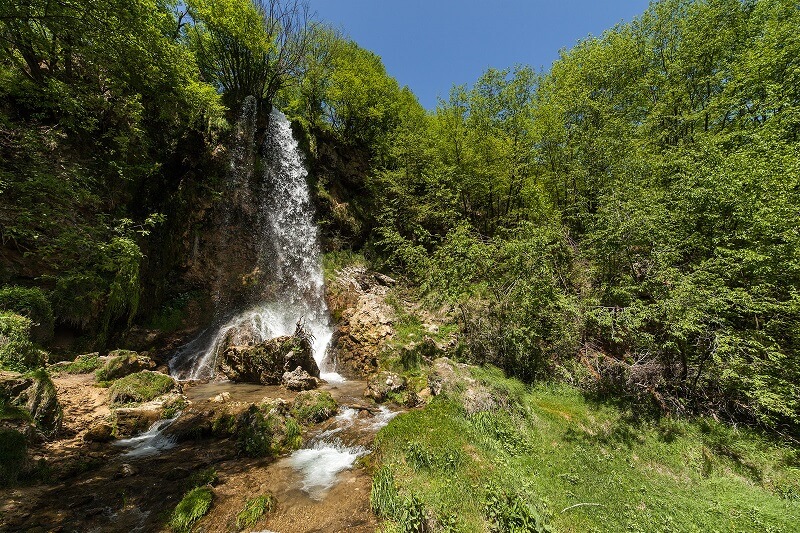 Gostilje Village is within easy reach of Zlatibor. It is 250km away from Belgrade, 30km far from Užice and 20km away from the very center of Zlatibor. A special feature of this area is a waterfall on the River of Gostilje. Approaching the waterfall is very easy. It can be easily reached by car following the dirt road, and a few well-trodden paths will take you directly to the water. The entire area around the waterfall is a small oasis of untouched nature. Harmoniously arranged rocks covered with moss and water that penetrates through them creating rapids, make an impressive image. The stream of water that falls from about 20 meters dominates the space. 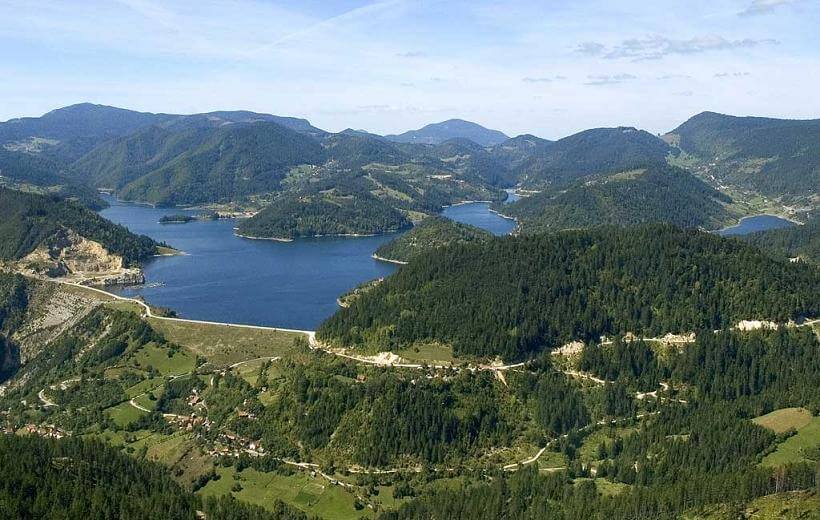 Tara National Park covers an area of 19,175 hectares on the highest part of the mountain Tara and is located in the municipalities of Bajina Bašta and Užice in Western Serbia. This is a typical forest area, and its preservation and diversity of forest ecosystems, many of which are relict character, is one of the richest and most valuable forest areas of Europe. The special value and importance of the Serbian spruce (Picea spruce), endemic and relict species, which managed to survive the last ice age. In the park area there are numerous archaeological sites and monuments dating from the Neolithic period to the present time.